Beltane is is the second fire festival of the Celtic year for pagans following the Wheel of the Year. It is also the third and final spring festival of the year (celebrating the height of spring), and the beginning of Celtic summer.

Occurring around May 1st in the Northern Hemisphere, some people celebrate Beltane when the local hawthorn trees are in bloom (even though this now occurs in mid-May since the adoption of the Gregorian calendar), or on the full moon nearest this event. 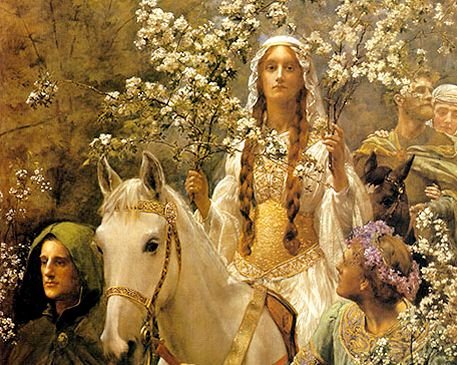 The earth has had a chance to warm up again since winter, plants and animals are active, and fertility and the bright green of new growth is everywhere. In pastoral tradition, livestock was turned out to summer pastures at Beltane.

Beltane occurs 6 months after Samhain, and in the Celtic way of looking at the seasons marks the end of winter (the ‘dark’ half of the year) and the beginning of summer (the ‘light’ half). Like Samhain, Beltane is a liminal (between) time, when the veil between the worlds is thin- considered a good time for divination and particularly for seeing the Fair Folk (the Fae).

The Irish pagan festival of Beltane, held on the 1st day of Summer (May 1st), lies at the root of the May Altar.  Symbols of growth and fertility are placed on the altar in a celebration of the season. The tradition of making a home altar on this date dedicated to the Virgin Mary continued in rural Ireland until around the 1960’s.

This photo shows an assemblage of images of Mary, decorated with May spring flowers of violets, bluebell, and hawthorn blossom. (Photo and info by artist Clare O Hagan, Ireland.)

A Maypole is usually a freshly cut tree trimmed to a pole that is decorated at the top with wreaths, strung with long ribbons, and erected in a clear area large enough for dancers, musicians, and spectators around it. (There are also permanent Maypoles in some towns in Europe.) Dances are done with the ribbons around the Maypoles, and include circle or interweaving dances.

The Maypole can be considered a symbol of the world axis (or axis mundi), and as a regenerative phallic symbol. Maypoles are common for school children in Europe (as they used to be in the United States), and are easy to make. Here is a tutorial on making a Maypole.

Many observe the traditional bonfire rites, including the dousing of the household hearth flame and relighting it from large communal bonfires, known as a need–fire, kindled from 9 sacred woods. After these fires die down some, livestock is driven between them for protection and fertility. People likewise dance around or jump over (small) fires, or burn offerings in them.

May Greens (Boughs and Garlands) and Baskets

Celebrations included the hanging of May Boughs on the doors and windows of houses and the making of May Bushes in farmyards.  These usually consisted of green budding branches of trees like rowan (mountain ash), furze, or more commonly whitethorn (hawthorn) which is in bloom at the time and is commonly called the ‘May Bush’ in both Ireland and Britain.  May baskets are filled with flowers and left for those who need caring and healing.

May Queen & May King

Walpurgis Night (Central & Northern Europe)occurs six months from All Hallow’s Eve (October 31st), and spring is welcomed with dancing and bonfires on April 30th or May 1st.

Floralia (Pagan Rome, April 27th-May 3rd) is a festival to honor the goddess Flora, a goddess of flowers, vegetation, and fertility.

Bona Dea (Pagan Rome, May 1st) features offerings were made to this “good” goddess.

Maia (Pagan Rome, pagan Greece) was the Roman Goddess of Increase (or a Greek Pleiades- nymph- and the mother of Hermes, from whom May gets its name). Roman Catholic traditions of crowning statues of Mary with flowers on May 1 has roots in this and other Pagan holidays.

Belenus — many believe Beltane honors the ancient continental Celtic sun and healer God, Belenus (also known as Bel,or Belin). Bel was known as the ‘Bright One’ and the god of light and fire. Early scholars put the Irish cognate Beli’s feast day on May 1st, though opinions now vary on this.

Ogam Calendar for May

In the version of the Ogam tree alphabet calendar popularized by Liz & Colin Murray (1988), the seventh lunar ‘month’ of the year is in May.  This month starts with the festival of Beltane, at the nexus between spring and Celtic summer. The Ogam tree associated with this month is the oak, or the Ogam letter Duir. 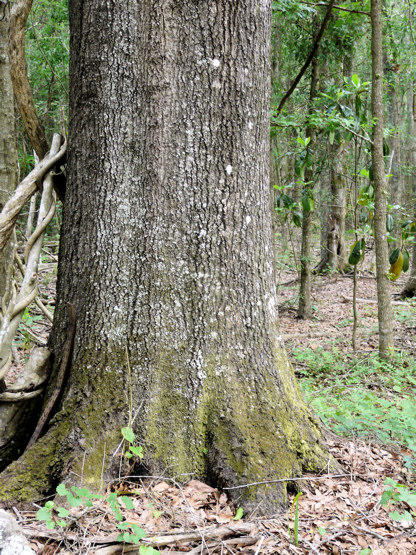 Duir, offers solid protection, inner strength, and is a doorway to mysteries. (Many large oaks have voids at their base that actually appear to be doorways.)  Oaks are subject to more lightning strikes than trees of comparable height, which made them sacred to various sun and thunder gods (Dagda, Taranis, Zeus/Jupiter, and Thor among them).  Oaks foster a wide range of other plants and animals, while providing wood, acorns, and other products.  Individual oak trees and groves were widely revered in Europe, and oaks are commonly featured in place names.

The fishing village of Padstow in Cornwall, England has a May Day celebration with a Hobby Horse (‘Obby Oss’).  The ‘Oss’ dances through town to the beat of drums and music, enacting death and rebirth.  (A Hobby Horse was in the original Wicker Man film in 1973.)  Here is a shortened version of one of the songs sung for their May Day:

Unite and unite and let us all unite,
For summer is acome unto day,
And whither we are going we will all unite,
In the merry morning of May.

Arise up Mr. —- I know you well afine,
For summer is acome unto day,
You have a shilling in your purse and I wish it was in mine
In the merry morning of May.

All out of your beds,
For summer is acome unto day,
Your chamber shall be strewed with the white rose and the red,
In the merry morning of May.

Where are the young men that here now should dance,
For summer is acome unto day,
Some they are in England and some they are in France
In the merry morning of May.

Where are the maidens that here now should sing
For summer is acome unto day,
They are in the meadows the flowers gathering,
In the merry morning of May.

With the merry ring, adieu the merry spring,
For summer is acome unto day,
How happy is the little bird that merrily doth sing
In the merry morning of May.

Now fare you well and bid you all good cheer,
For summer is acome unto day,
We call no more unto your house before another year
In the merry morning of May. 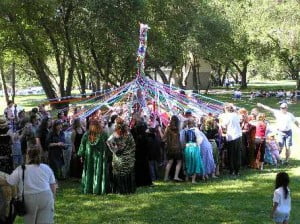 Here is a gallery showing how Beltane is kept as a holiday now – celebrations, observances, and music included. 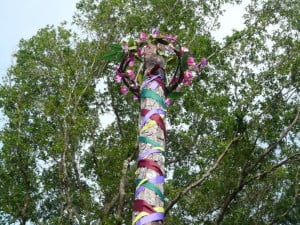 There’s a new cut of the original 1973 mystery movie Wicker Man [Blu-ray]. Not so accurate on Pagan ways, but a fun campy musical none the less.

Return to Druid Wheel of the Year

May devotions to the Blessed Virgin Mary (2014) in Wikipedia.

Obby Oss May Song, retrieved from the Cornwell Guide website.

This Beltane page was originally published on 3-2-2013, with many revisions since then.