This year’s solstice on December 21, 2012 has a lot of expectations, both good and bad, buzzing around it. People are somewhat irrationally expecting both the worst in physical devastation or the best in sudden species enlightenment. The actual truth is likely to be that things will seem to stand still (as in the sun seeming to stand still- the definition of solstice), and then we will each of us have to re-evaluate where we are, and where we are going. If all of this hoopla and media attention gets us all to look at our fears and hopes realistically it will have been worth it.

My dark and light side thoughts are below. So- if we all crash and burn I believe we’ll be around again someday to try again, so see you then! If we all ascend I hope there are still trees! Happy Solstice!

The Mayan Apocalypse. Armageddon. The Rapture. Meteors. The end of 2012, a difficult year at the beginning of a challenging century. All of these people believing that God will leave us, or punish us, or take us, or end us on December 21, 2012. It’s all so convoluted you can’t even track the logic of these beliefs anymore, or know where one feeling of dread ends and another begins. And sad as the belief in a cosmos out to get you is, sadder still is that children are calling NASA saying they are ill or suicidal because of what this date supposedly means. Governments (for instance in the United States, and Russia ) have even had to issue proclamations that the world won’t end.

Religious groups that declared the end of the world in the past – like the Jehovah’s Witnesses (several times), Heaven’s Gate, and the Branch Davidians – look like amateurs compared to the groups believing in ‘the end’ now. Doomsday Preppers (and all of the manufacturers of products being marketed to them), militias, churches, and civil unrest conspiracy subscribers are everywhere.

Look and you may see the signs that people in your community are fanning these fears. I did, and noticed things that gave me pause. One being that pistol and firearm practice has drastically increased in my neighborhood in the last 2 weeks. People were putting off buying property until ‘after the election’ (and still putting it off…) Big ticket items are not being sold.

And in US society at large, it seems there’s more of an us versus them attitude- where people of other classes, race, area, or political party are the enemy. People have gone beyond just being intolerant, there’s a strident, palpable smell of fear around them. It remains to be seen if this is just a type of transient hysteria, or if the fear will persist past Dec. 21, 2012 becoming an actual doomsday phobia.

But wait- you say maybe it will be the great positive Cosmic Shift instead. (Please to not confuse this with the Harmonic Convergence.) Where the day we’ve all been waiting for- December 21, 2012- will arrive and the earth will cross the galactic center (and or go into a black hole, or other variants). Those of us who have prepared will ascend, and others will be left behind. (No wait- that sounds like the Rapture folks again…) Some say the Mayans knew- but their ancestors won’t be allowed into their temples on the fateful day.

My questions are- when did hoarders and self-sufficiency types combine and become Preppers; Pagans and New Agers become Cosmic Rapturers; where is the middle ground, and the balance between the extremes; will we try not to let the negative get the better of us; and is there enough critical mass of people in motion to actually bring about fundamental change?

The answers are- as always- in each one of us. Not in the media, or guns, rumors, or our nightmares. Fear starts in our own gut, before it spreads outward. (But luckily awe and transcendence also.) I don’t want any fear on my part adding to the growing pool around us.

So as my winter solstice and the year’s longest and darkest night approaches, I’m asking- what are my fears? What hits me where I live, and keeps me bound up? What am I contributing to the fog of fear that creeps out over the water? (See my fears at the end of this post, if you like. * )

I can’t answer for others, but I will know my fears and embrace them; move beyond, and see what is real instead. My prayer for all this solstice-

May peace and stillness spread outward; may the fog lift. And in the darkest night, during the growth of new roots, the sun returns and new growth awaits.

And Out Into the Light

So, I could talk about working with your own energy and soul, the possibility for humans starting to move beyond our current ways of doing things, and all of us just flat growing up. (Please- any ol’ lifetime now…)

But really- there are so many people writing about this, or the spiritual or energy practices they are using to get there. That’s great; and if we would just use the better parts of our holiday traditions or beliefs it raises us all up.

[For examples of what can be said about the winter solstice see the Order of Bards Ovates and Druids, Mara Freeman’s article at the Chalice Center, and Damh the Bard’s Reflection on the Holly King.]

But what’s been helping me into the light this season (besides meditation and energy work) is humor!
May laughter blow the clouds away and let us see clearly!

First on the laugh list- to paraphrase John Michael Greer, ‘If the Four Horsemen of the Apocalypse knock on your door offer them beer’, consider offering them this one- 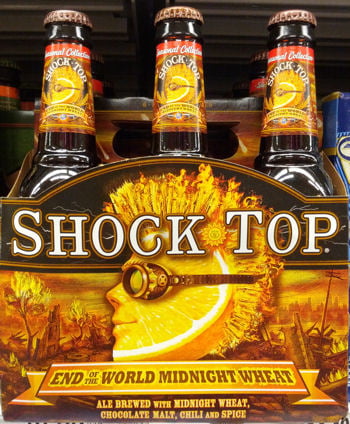 Likewise, you can buy a special ‘wine of the Apocalypse’ at the Turkish village of Sirince, one place that’s supposed to be safe from the apocalypse. Though they would probably have good wine at Bugarach, France- population 176 – where the Pic de Bugarach mountain is said to be a parking lot for UFOs, and is another spot which is going to survive Armageddon. ( But be sure to send your Doomsday and end of the world new year’s cards before you start drinking.)

Don’t believe NASA when they say the world won’t end? Then read about the Russian scientists asserting that they have cracked the crop circle code, and that a pole shift is impending – but its end result will be a shift into 4th dimensional consciousness for those who are able to raise their consciousness in time. (Phew- good to know.)

And last but not least is the Australian prime minister, Julia Gillard announcing the apocalypse in a video posted on YouTube:

A world leader with a dry sense of humor? Priceless!

*  Unfortunately, for me- like others-  there are some fears that come from a very real uncontrollable threat. (Like having a particular troubled person in your life, and the internet disclosing your – should have been hard to find- physical location.)  C’est la vie, or maybe c’est la mort. Sitting down, dealing, and playing cards with death again- like we all have to, and learning to enjoy the game.

Then there’s the fear of (physically) losing my mind again, if my brain herniation were to reoccur. The surgery certainly helped, but the term ‘incurable’ can haunt, especially when you do one 13 hour day working on your feet and then have symptoms for 2 months afterwards. (So a big slap in the face to ever doing public health disaster relief work again, which is always a big long string of 14 hour days. Alas, a dream gone.)  This is a fear I have to let go of each day. Now I have to start working more constructively to improve my health (but being able to walk dependably and keep consciousness certainly helps 😉 ).

And an old, old fear, that people will basically lose it and start being destructive for no reason. Driving along and running over people, destroying greenhouses, and the like. I saw this in a dream in about 1970, well before the many movies and other media with similar themes. A nightmare that still haunts.