Some experiences in growing medicinal and spiritual herbs.

Before our move across country, I had an established herb garden in northern California. I’d grown culinary and medicinal herbs for years, and then planted herbs with spiritual uses in Spring 2008. (We moved in late Fall 2010. Last I heard the house had become a rental and they weren’t doing much with the yard, so my hopes are that the herbs are still coming up on their own.)

Now I’m planting new herbs- hopefully not just for the deer’s dining enjoyment, but I’m told many of the ones I had before won’t grow in the Southeast. I’m hoping that some of the moisture-loving plants I tried without much success in California will grow better here. (Part of the fun in growing herbs is finding out where they will thrive. I move them around if they don’t like the space they’re in.) So here are some of the herbs I grew in the past.

(Note: the first set of photos are taken when the plants were declining in November, but you get the idea.) 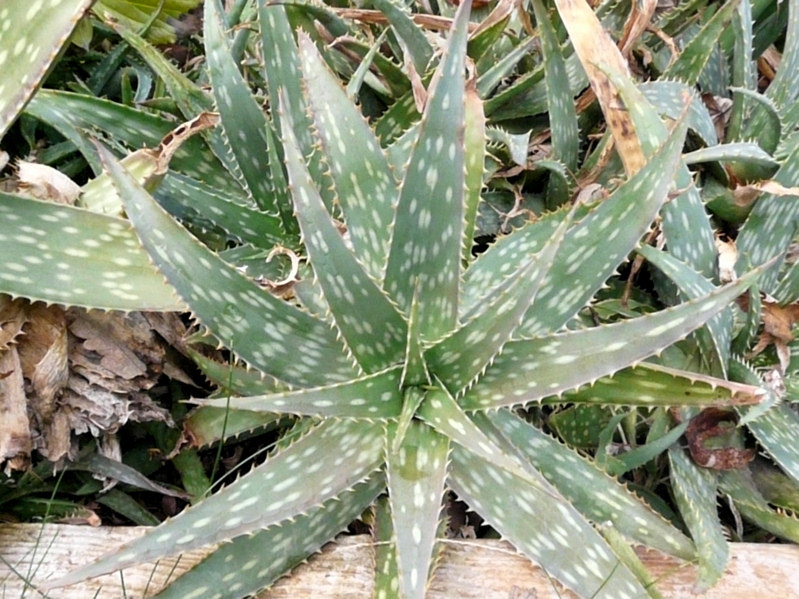 A healing succulent that grew well in extremes of snow and heat. (It would wilt, rot, and die under snow, and then sprout back up!) This patch is over 10 years old here- it had to be separated and pieces given away every 3 years. We used the leaf gel topically for burns. (11-2008) 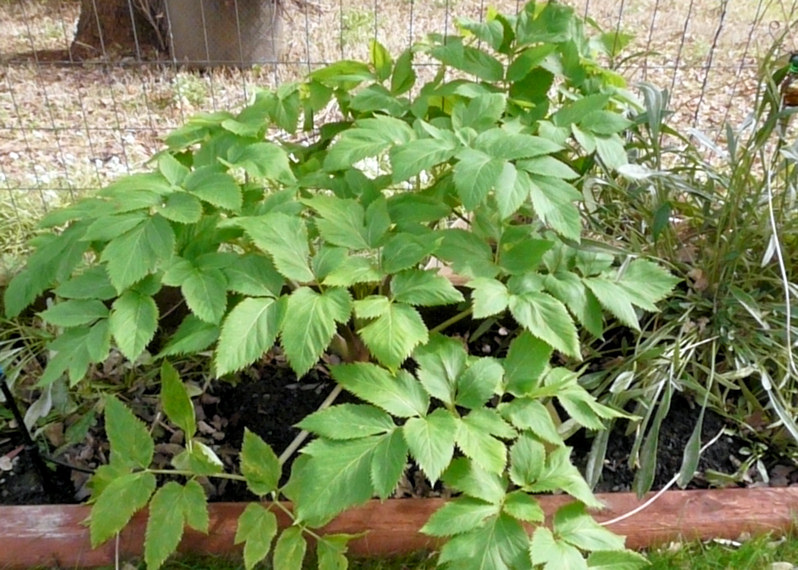 Angelica (Angelica archangelica)
A beautiful spiritual herb, here it’s only been planted 5 months. The second year seed stalk and growth was impressive. Angelica is used in protection and purification, and just feels great growing in the garden. (11-2008) 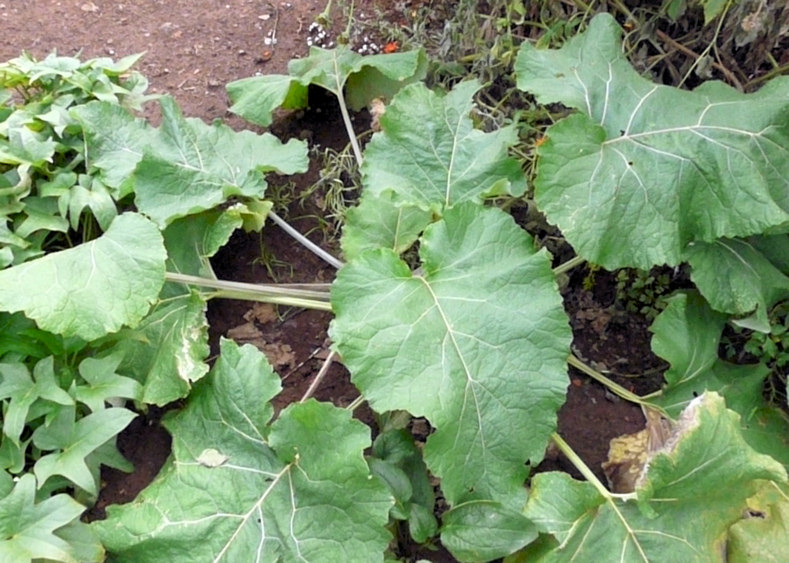 Burdock (Arctium sp.)
A Chinese and American Indian medicinal herb, this plant didn’t like clay soils and needed shade and lots of water. (11-2008) 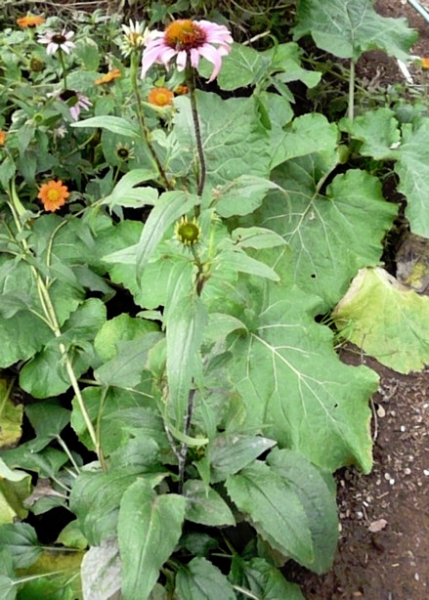 The purple ‘coneflower’ in the photo. A standard healing herb- I use parts of this plant in teas to combat colds & flu. (11-2008) 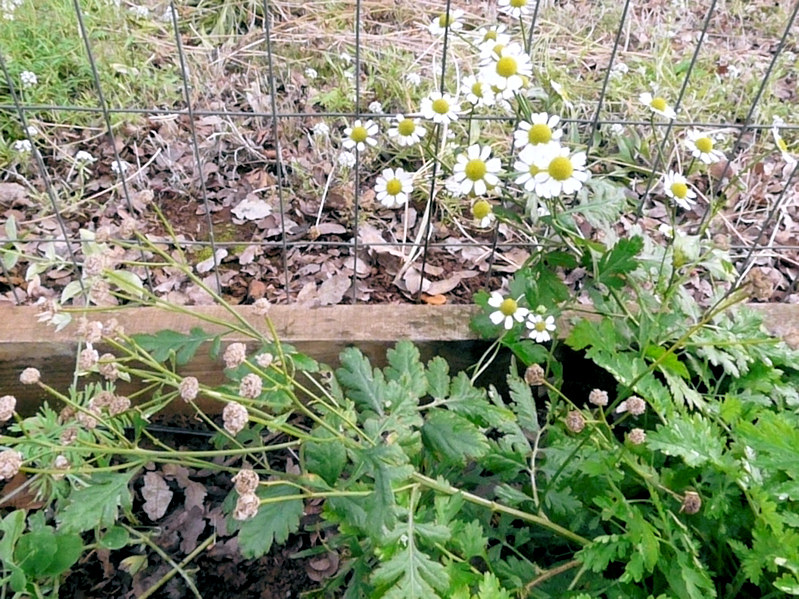 This healing herb grew so fast it had to be regularly trimmed. It became a huge bush that spawned new plants everywhere. (11-2008) 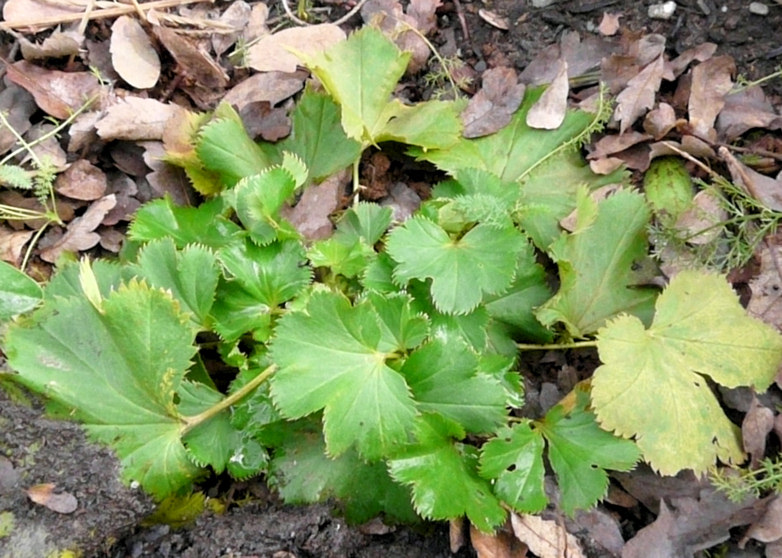 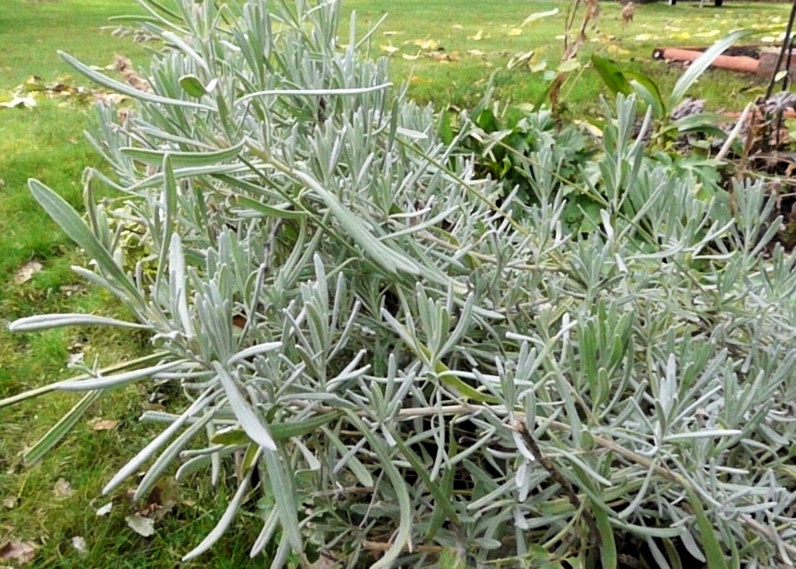 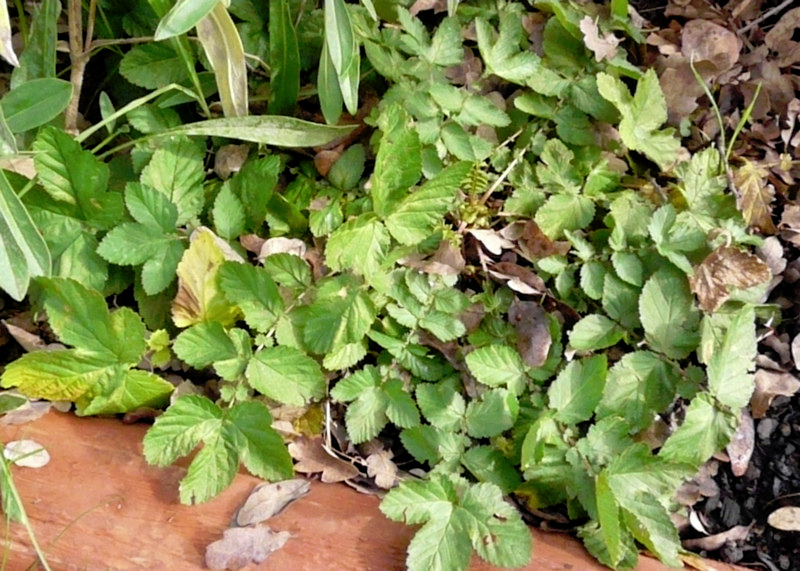 Meadowsweet (Spirea ulmaria)
A spiritual herb, likewise not liking the heat, and in the ground 5 months. A pleasant smelling herb used to strew about, and associated with love and a merry disposition. (11-2008) 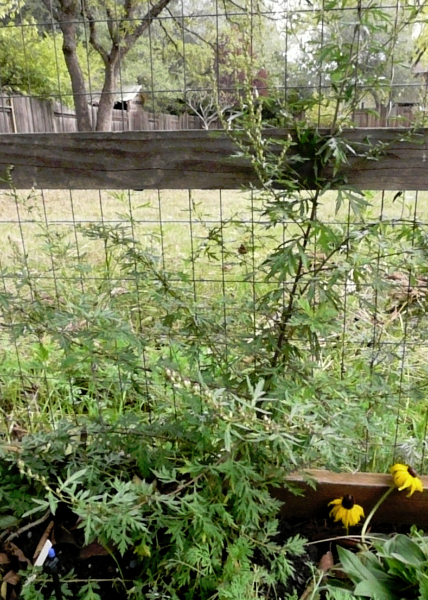 Mugwort (Artemisia vulgaris)
In the ground 5 months. With plenty of water and some sun this plant grew very well. Used in consecration, protection, and visionary dreams (as dried leaves in dream pillows). (11-2008) 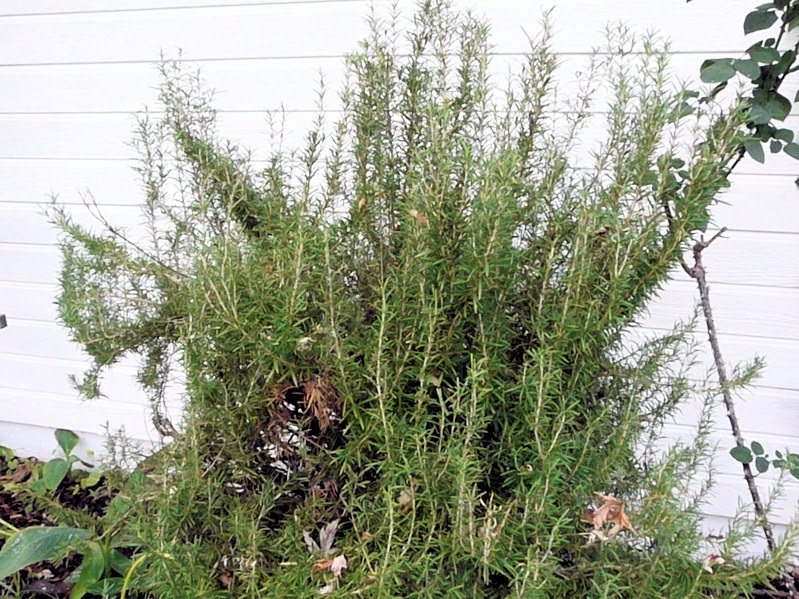 Rosemary (Rosmarinus officinalis)
As a child I used to use a tea of the leaves as a hair rinse. Now I use the leaves in cooking, and for protection & purification. This bush was over 5 years old here. (11-2008) 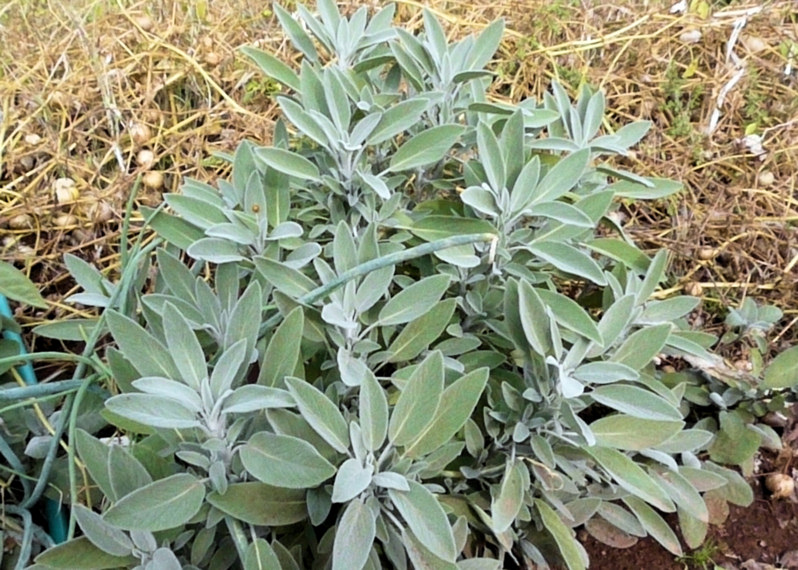 Sage (Salvia sp.)
An easy to grow and wonderful cooking and medicinal herb, also used in purification. (I use it as incense.) (11-2008) 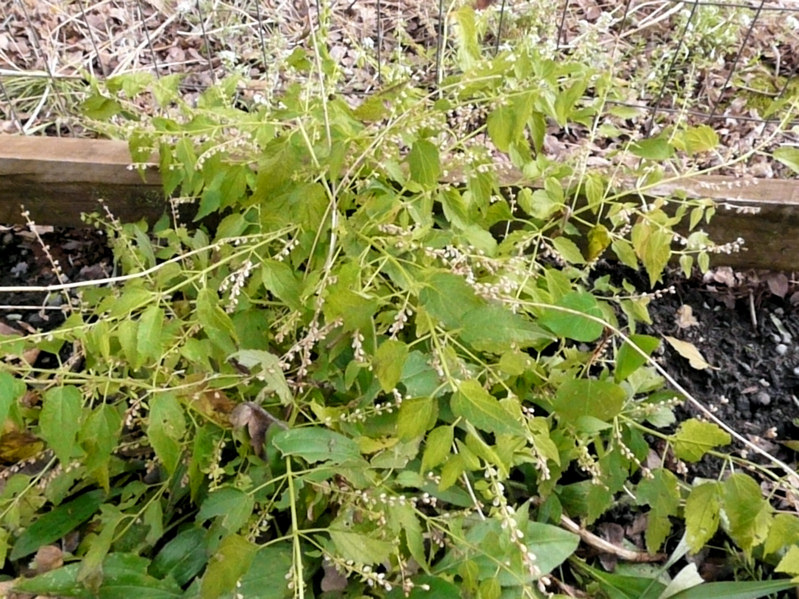 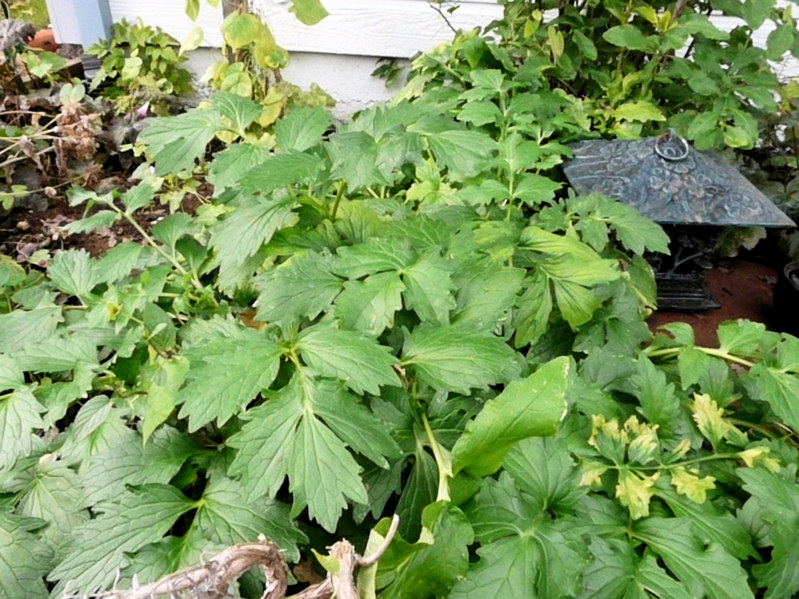 Valerian, (Valeriana officinalis)
A calming medicinal herb much touted in sleep aids, unless you are one of the ~15% that has an opposite response (like me). (So of course, it grew like a weed.) Also used for consecration, protection, and purification. (11-2008) 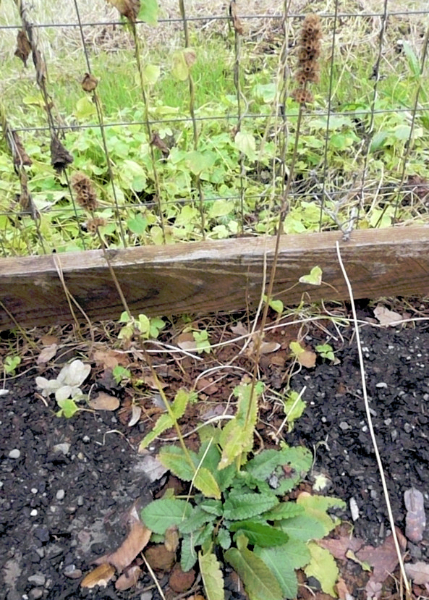 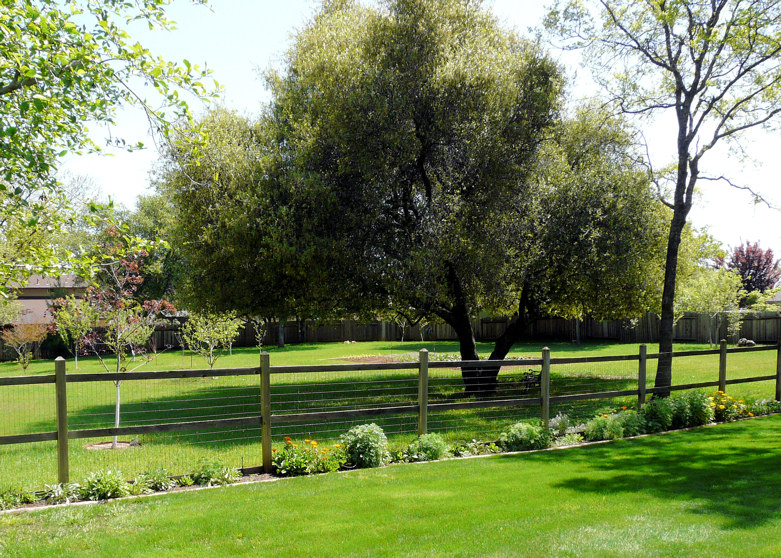 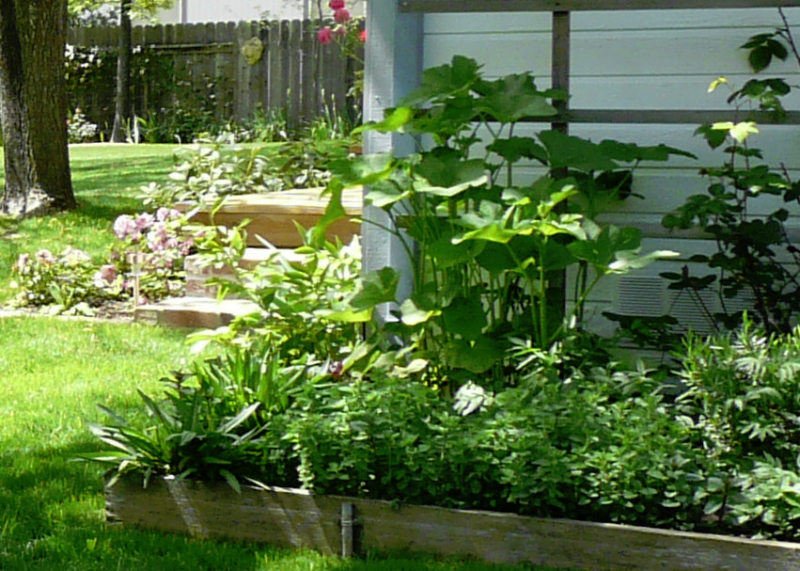 Our fruit (and one hazelnut) orchard. April 2010 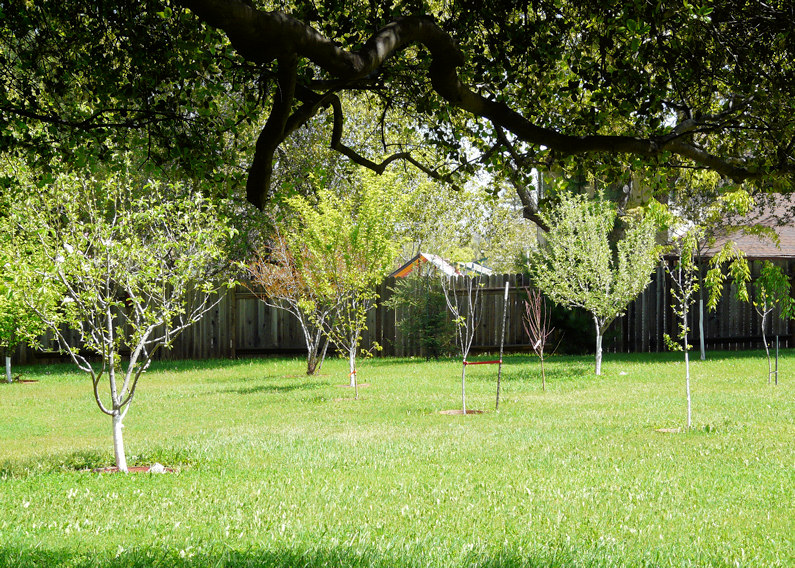 The vegetable and flower garden, September 2008.