Druid Robes
A look at Druid clothing in history, how ceremonial clothing is used by present-day Druids, and ritual clothing tips and resources.

Depictions of Druids from the Early Revival Period

There is limited information on what the ancient Druids wore. Greco-Roman, Medieval Irish, and later Irish and Scottish folklore sources indicate Druids wore white garments (not robes- this resulted from a mistranslation from the Roman historian Pliny’s account).

There is more data for what the Celts generally wore, and it is likely Druids would have worn a tunic and cape and/or tunic with a skirt. Regardless, there is little definitive evidence about what Druid clothing specifically consisted of.

Starting in the mid 1600’s CE and in the United Kingdom, Revival Druidry visualized their own romanticized versions of what the ancient Druids looked like. They came up with their own style of Druidic garb, which generally included bleached white, full length robes and sometimes the use of a nemyss (a type of ancient Egyptian head covering). (Some Druid orders and the Golden Dawn tradition still use this ‘traditional’ ceremonial clothing.)

The early Revival Druids also believed in and held public rituals (documented with photos in the early 20th C), and currently there are large cultural Gorsedd festivals where participants wear the ‘standard’ Revival white robes.

The slide show in this section shows images of Druids from over 100 years ago, and they are still in common usage. These images don’t accurately reflect the ceremonial garb of most modern Druids, but do illustrate the stereotypes about what Druids wear.

Druidic Vestments-Llewellyn Encyclopedia. A quick, to the point overview.

‘Celtic’ Clothing (with Greek and Roman Influence) from the Iron Age-a Realistic View Based on What We Know (29 pages). A very nice survey of recent research, with photos.

War, Women, and Druids- Eyewitness Reports and Early Accounts of the Ancient Celts By Philip Freeman. This book looks like it could be a good general resource on the Celts.

Do you have to wear a robe as a Druid or to be in a ceremony? No. Many people wear robes to remind themselves that they are about to enter ritual space and time.  (But Druids will also often tell you that they can perform ritual without external trappings.)

Some groups will encourage wearing ceremonial clothing for special occasions- like Order anniversaries or initiations. Most of the Druids I’ve come across in the United States are fairly casual, and seldom get concerned about wearing the same ‘uniform’.

Here are some examples of modern Druids in their ceremonial wear, mostly from the last decade in Ireland, the UK, and the United States.

Symbols of Druid Identity– by Isaac Bonewits (on ADF uses).

Druids and Their Robes – by John Beckett. Several Druids talk about the ‘whats’ and ‘whys’ of our robes. 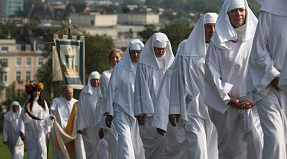 The white robes many of us wear now has nothing to do with what the original Druids, or ancient to modern Celts wore. So since we don’t have decades of blokes showing up and being photographed at big public rituals like in the UK, people in North America really wonder about us when we wear these robes. It can even be hard to explain to those interested in joining our groups.

*   The original historic description from Pliny the Elder was that the Druids wore white clothing (not robes), and would likely have been just light colors.

*   Fraternal Druids in the UK still wear the Nemyss (Egyptian head-dress of the Pharaohs), taken from Golden Dawn and other magical orders.

Since the emergence of the second Ku Klux Klan (KKK) in 1915, white robes with or without a hood has developed an association with KKK regalia. The KKK is a white supremacist hate group that mostly wears bleached white robes with pointed head coverings, similar to traditional Druid clothing (white robes with hoods).

*   Isaac Bonewits – ADF co-founder relayed that decades ago ADF members started wearing white berets so people could find each other at meetings in public places. But they found out the KKK was also wearing white berets, and – “The Mother Grove immediately decided to abandon the use of them, for fear that our folks would be confused with theirs.”

*   I live in the southeast US, and our Grove holds open and public rituals in parks for the seasonal festivals. I have personally had a black child give a scared look when seeing my robe (at left), and I don’t want it to happen again. So unless I am at a Druid only gathering, I will not wear a white robe again at our public rituals.

*   KKK Members have also been showing up without hoods, and related groups are sporting white polo shirts. (Look at groups 1, 4, and 5 at this site listing extremist clothing.)

Most of the clothing suggestions in the next section happen to be found across cultures, but many try to add other elements to their Druid outfits. If you adopt the elements of a culture other than your own- especially as part of a dominant culture over a subjugated culture- this can be exploitation or even a form of desecration.  This would be antithetical to the intent of ritual garb. We are post-colonial and rich in the cultures of those that have come to North America, we can be aware and figure this out.

*   In some areas if you wear white clothing and a white head covering that could be seen as copying followers of Voudon or related African diaspora traditions.

*   If you are of European descent in the US and wear Native American leggings, with a rawhide drum, burning white sage, by a Plains teepee, and doing a sweat lodge with Lakota words for your ‘spiritual’ practice that would be an extreme example of misappropriation. (See the 1993 Declaration of War Against Exploiters of Lakota Spirituality to see how angry one large group of tribes and bands is about this issue.)

*   Some have even raised issues of appropriation for those with Celtic heritage (itself a difficult concept) here in the US.

Some ‘how-to’ articles and pattern suggestions to get you started. 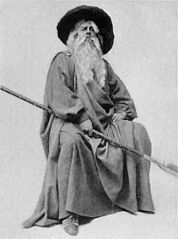 Robes tend to be fuller in the body, so the drape of your fabric will be important.

Butterick B5626 – Unisex Robe and Collar. Out of production- search online for sellers.

McCall’s M4091 -Misses’ Chemise In 2 Lengths (an interpretation of an Irish leine). Out of production- search online for sellers. 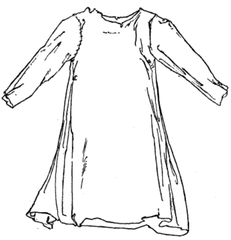 Tunics & Tabards tend to be slimmer in the body, so fit is important.

One easy way to make a tunic: use one of your loose t-shirts as a pattern for your tunic.

Cloaks are very full, and work best with fabrics that drape well and are heavier in weight.

A do it yourself open long maxi vest

An online search for ‘Druid robes for sale’ now yields many sources of ritual wear.

You can also search for tunics, robes, tabards, etc. Suppliers can also be found on venues like Etsy or Ebay, where they are more likely to make you a custom piece.

Robes tend to be fuller in the body, so the drape of your fabric will be important.

Butterick B5626 – Unisex Robe and Collar. Out of production- search online for sellers.

McCall’s M4091 -Misses’ Chemise In 2 Lengths (an interpretation of an Irish leine). Out of production- search online for sellers.

Tunics & Tabards tend to be slimmer in the body, so fit is important.

One easy way to make a tunic: use one of your loose t-shirts as a pattern for your tunic.

Cloaks are very full, and work best with fabrics that drape well and are heavier in weight.

A do it yourself open long maxi vest

An online search for ‘Druid robes for sale’ now yields many sources of ritual wear.

You can also search for tunics, robes, tabards, etc. Suppliers can also be found on venues like Etsy or Ebay, where they are more likely to make you a custom piece.

What are your logistical and practical issues? Ritual clothing doesn’t have to be a long, cumbersome robe – a shirt, tunic, or short robe may be more practical. Do you need-

I strongly recommend the use of natural fabrics for ritual clothing. They tend to wear well, are easy to sew and repair, breathe in hot weather and keep you warm in the cold, and are less likely to catch on fire and/or melt on you. This includes – cotton muslin, denim, broadcloth and similar fabrics; silk, especially silk noile (AKA ‘raw’ silk); wool (if you live in a place that is still cool enough to wear it); and linen.

Be creative in finding and using your fabric. Cheap fabric can be found online. Muslin is inexpensive just about everywhere, especially if you can use the heavier unbleached drop cloths at hardware stores.  Large bedsheets (new or used) can be used for fabric, either for your final product or to make a pattern for a test run before you go out and buy expensive material. Be aware that some fabrics- like thin white sheets- will not be opaque and your clothing underneath will show through. (I really recommend doing test runs, especially if you have limited sewing experience, are experimenting with patterns, or trying to figure out what style you want someone to make for you.)

Consider the different ways you can use your chosen clothing. After realizing many of my summer rituals would be out in 90-100+ degree weather, I came up with a cooler method of wearing my long robe- I push the sleeves inside, secure the robe at my neck, and wear it open like a cape with cool clothing underneath. (This has worked out quite well.) To deal with our changing weather, some people just use capes with seasonally appropriate clothing underneath. Kilts can be warm or cold, depending on fabric and on whether they are worn with or without tall socks and/or boots. Some people will use a basic tunic, which they layer with tabards/jerkins, shawls, etc. There are lots of different ways to make your clothing work.

Northwest California, US (September 2006). This is a full, belted robe. I made it out of off-white raw silk (silk noil), based on a choir robe pattern. ( I started with a pattern similar to this one.) Instead of putting in the sewn in front pleats I left them out and added a hood. I then lap over the two sides and wear it with a belt. I’ve used this robe for over a decade and it is still in excellent shape. 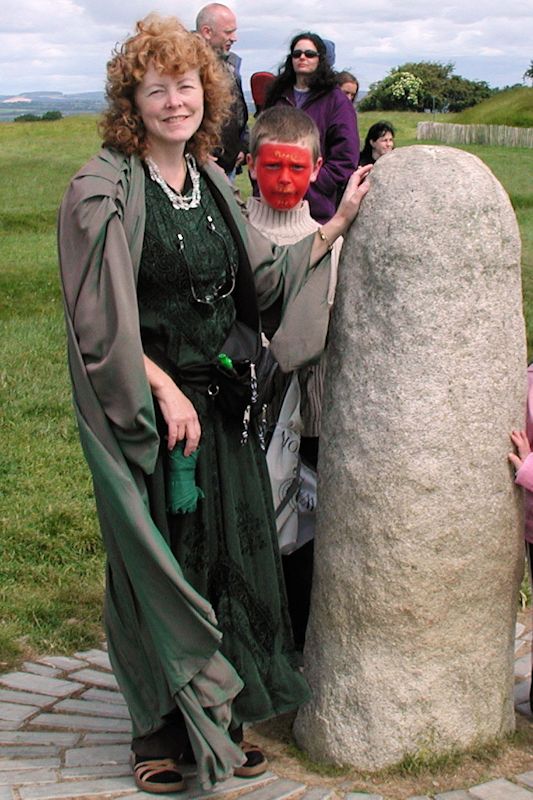 Your author at the Hill of Tara in Ireland, June 2004. I made this open robe without a pattern. It has pleats at the shoulders, and is made of 1940’s green and rose colored shot silk. The robe was easy to transport, but the antique fabric is weak now.

This Druid Robes page was originally published on December 20, 2015, and revised with a new section on robes in North America on September 3, 2019.