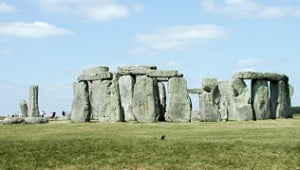 Given the recent discovery of the remains of a wooden henge near Stonehenge, those in the know are saying that theories that the stone circle existed in “splendid isolation” can now be put to rest.  I would say so given that there have been lots of recent discoveries in the area, proving that these sites are regional in nature.
***

The circular ditch surrounding a smaller circle of deep pits about a metre (3ft) wide has been unearthed at the world-famous site in Wiltshire. Archaeologists used radar imaging to find this circle, and believe timber posts were in the pits.***

There is evidence that Marden was a sort of builder’s yard for workers bringing the sarsen stones to Stonehenge.

The tombs were found from airplane.

And technology has helped us find these other ancient sites:

the site may date back to as far as 5,000 B.C., which would make it the oldest astronomical observatory on the European continent.